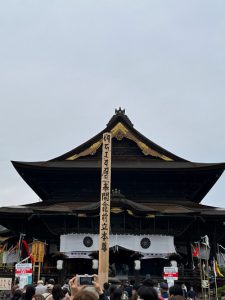 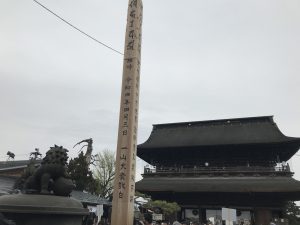 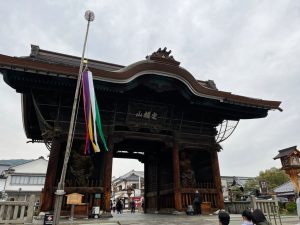 This is Staff N.

The other day, I went to Zenkoji Gokaicho.

For me, who is addicted to tempura soba, soba is a specialty of Shinshu, and I was happy.

Zenkoji is a temple in Nagano prefecture with a history of about 1400 years.

Zenkoji Maedate Honzon Gokaicho is held once every seven years by welcoming the “Maedachi Honzon” (an important cultural property of the Kamakura period), which is a substitute for the absolute secret Buddha, to the main hall.
It is said that in the spring of the Buddha’s capital, a thankful connection with the Buddha will be born.

Opening of books only from April 3rd to June 29th. Even though it was a weekday, there was a long line trying to touch the turning pillar. A turning pillar is a pillar with a height of about 10m that can be erected in front of the main hall during the opening period. Originally I wanted to touch it with both hands, but it was necessary to disinfect with alcohol before and after only one hand.

When the current main hall was rebuilt in 1707, the Matsushiro feudal clan was appointed by the shogunate to supervise this pillar. It is said that the pillar of merit has been donated by Matsushiro for more than 300 years.

For this turning pillar, a cedar tree that is nearly 200 years old in the Toyooka district of Suzaka City was selected.

The turning pillar will come to Zenkoji after walking around Matsushiro-cho with the Daimyo procession and the Hime procession. It is said that there is a benefit to touching the towline on the way, and many people gather along the road.

Since there are many events during the period, I would normally like to participate in all of them, but since it is a limited express, it is hard for 3 hours one way from Nagoya … I envy the citizens of Nagano prefecture.

I still have 5 chances. It was lit up at night and I could see the live camera on YOUTUBE, but it was very beautiful.

When I was looking at the live camera in the hotel lobby at night, I laughed at the person who ran just before 21:00 and inevitably touched the pillar. If you are worshiping, don’t forget that your appearance may be broadcast nationwide (laughs).

According to the temple, the main hall has been hit by more than a dozen fires since it was founded in 642, but each time it has been reconstructed and protected by the heart of longing for Tathagata all over the country. that’s right.
The main hall of Zenkoji Temple is designated as a national treasure and is the largest wooden cultural property in eastern Japan. The magnificent and graceful main hall of the cypress bark is a dojo that warmly wraps all people with the mercy of the Buddha. The building is a combination of the “Kondo”, which enshrines the Buddha, and the “Church,” where many people participate in the work of monks and worship.
Zenko-ji does not belong to any sect, and has gained wide and deep faith as a gate for the paradise of all people and as a sacred place for the great mercy of Tathagata who gives peace in this world.

The main Buddhist temple of Zenkoji, “Ikkosanzon Amida Nyorai,” has a unique appearance of Zenkoji, with Amida Nyorai in the center of one halo, the Kannon Bodhisattva on the right, and the Mahasthamaprapta on the left. I am. It has been an absolute secret Buddha since Hakuchi 5 (654), and in the Kamakura period, “Maedate Honzon” was created as a substitute for the Hakuchi. It is usually enshrined in the treasure house, but you can worship it specially only when you open the book once every seven years.

While N was also lined up, I was burning my eyes.

Speaking of Zenkoji, the saying “I’m drawn to Zenkoji by a cow” is famous.

A long time ago, a poor-hearted grandmother lived in a village in Chiisagata, Shinano Province. One day, as I was washing the cloth in the river, a cow appeared, hooked the cloth on the corner and started running. Following the cow, the grandmother arrived at Zenkoji.
When the sun went down and I entered the temple, the drool of the cow, illuminated by the light, read, “Do not think of it as a cow. Your heart that guides you to the path of the Buddha.” Then her grandmother was completely reborn as a devout person.
Later, when she visited the nearby Kannon-do, she found the cloth at Kannon-sama’s feet. Her grandmother knew that the cow was an incarnation of the Buddha, and she deepened her faith in Zenkoji and had a happy paradise. This Buddha is said to be Komoro’s Nunobiki Kannon.

That was the origin of the saying.

She also has a cute cow-shaped red stamp, and she bought N, who is not interested in the red stamp.

If you go to the right side of the inner camp, you will find the entrance to the Okaidan Meguri. The ordination platform tour is a paradise ghost by going around the pitch-black corridor under the floor of the lapis lazuli and touching the “paradise lock” that hangs in the middle. It is a dojo where you can make a promise. In the olden days, it was seen when entering a casket such as a sword, sandals and white wooden japamala, and it is said that he went around while chanting Nembutsu. Zenkoji Temples all over the country also have different shapes and lengths, but there are also patrol platforms.

When I went around the platform and searched on the internet, I got “scary, panic, fear”, but it was really pitch black. There is a small light at my feet, but I am desperate to keep up with the person in front of me.

It seems that I touched the wall with my right hand at the waist, but that was not the case.

Then, the couple behind me got lost and heard a voice saying, “It’s a dead end! I accidentally touched the wall on my left hand!” “The garbage bag of the person in front is reflected, so look at that, dad!” It seems that it was used as a landmark.

Next time I will definitely find the lock.

If you are interested in Zenkoji, where you can explore the darkness, turn, push, and experience a lot of power, please do not miss it.

There are still many things I haven’t written yet, so I’ll continue at a later date.