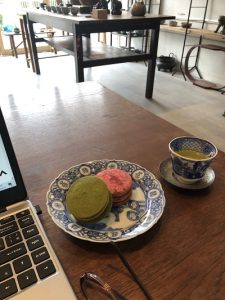 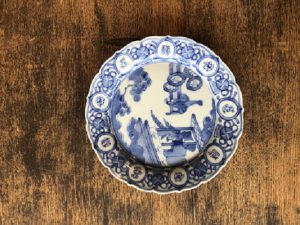 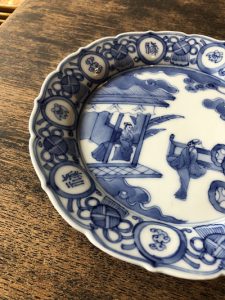 Hello, this is Staff Y.

Today, the other day, the owner gave me a return for White Day, and I am having a lunch break with butter cheese sandwich, which is not yet available in Nagoya. (Thank you again this year. Thank you.)

It was so delicious that I decided to take care of it one by one a day, but I decided to take one for each butter sand, so I took a tea break and took two for the photo. I had a model appear. So he? She? I took a picture with a flat plate of Seto ware that suits us.

This plate is a seto ware from the Meiji era, and the refreshingly dyed pattern is very delicate. No matter what ingredients you put on it, it will be a clean presentation.

However, my lack of study. By the way, I realized that I don’t know much about the characteristics of Seto ware. I often say “Setomo”, but that “Setomo” is …

As you know, Seto ware is also a general term for pottery made around Seto City, Aichi Prefecture, which is one of the world’s leading producers of “Seto ware”. Pottery making began in the Seto area during the Kamakura period, and the reason for this area is that it is possible to collect high-quality clay (kibushi clay, frog-eye clay) that is also the raw material for pottery. Needless to say, I was blessed with the environment.

However, in the history of pottery, while there are successors such as Banko ware the other day and pottery whose history is interrupted for some reason, here Seto has continued to produce pottery without interruption for about 1000 years. increase. Even with the inherited history, I can understand why “Setomo” has established a solid name.

As you all know, Japanese ceramic kilns have six typical production areas (Echizen, Seto, Tokoname, Shigaraki, Tamba, Bizen) that have been in production for a long time from the Middle Ages to the present. It is called “Nippon Rokkoyo”, and Seto ware is one of them. It is known as a rare production area in the world, and the name comes from, but it seems that people from ancient times called the area where pottery is made “pottery”, and the word pottery. There seems to be a unique theory that it turned into the place name of “Seto”. You can imagine how Seto has been a key point of pottery since that time.

And, regarding the method of Seto ware, it is famous as the first type of pottery in Japan to be baked with glaze (Yuyaku: Uwagusuri), and it is truly a pioneer in the pottery world.

As for the source of Seto ware, the remains of the old kiln used to bake pottery, “Sanageyo”, which was in operation in the current Nagoya city area of ​​Aichi prefecture from the late Kofun period to the early Kamakura period. ) ”It seems to be a pottery that follows the flow. The origin of this area began with the production of Sue pottery in the first half of the 5th century, and from ancient times to the Middle Ages, there were many Seto ware kilns over 1,000 units covering about 20km square in the eastern part of Nagoya City. It seems that it was made.

This kiln ruins is a Sanage kiln, and the official name is “Sanage Yamasei Nanroku Koyosekigun”, and it is said that it spread to Seto ware and Tokoname ware. We are sorry.

You can also visit the ruins of such an old kiln at the Higashiyama Botanical Garden (the “climbing kiln” excavated in 1972 (Showa 47) in the early Kamakura period) in the neighborhood of the antique art Fukosha. I passed by without knowing anything before, and I think I should visit again for review. If you are interested, why don’t you go there?

Seto ware (Furuseto), which has been glazed since the Kamakura period, is treated as a luxury item that is far from the common people at that time. The production method has changed from to a large kiln, and mass production of Seto ware will begin, centering on products that are used daily, such as bowls, small plates, and cooking utensils.

The name “Old Seto” came out earlier, but it seems that the ones made by the Muromachi period are called “Old Seto”. At that time, the production base of ceramics moved to the Mino region of Gifu prefecture, so it seems that Mino ware will also be known as pottery that follows the flow of Seto ware. Certainly, as you can see when you visit, the area from Seto to Mino is the area where it is difficult to draw a line between Seto or Mino or pottery village.

Furthermore, in the Edo period, the production of traditional ceramics decreased, and Omuro tea bowls and waist rust tea bowls appeared. The division of labor by instrument type will be carried out in each village, and daily necessities will be mass-produced, and porcelain production will start in the latter half of the Edo period. Then, the pottery that was the mainstream until now is called “main business pottery”, and the newly introduced porcelain is called “dyed porcelain” or “new porcelain”, and Seto ware has the face of either pottery or porcelain. It will be. By the way, the plate I used today is also dyed and baked. So that’s it.

Then, in the Meiji era, the infrastructure was set up with the introduction of power machinery, which is the basis of the Seto kiln industry. The potter’s wheel is machined, and the pattern is transferred rather than handwritten. Kilns used coal and heavy oil, and Seto ware pottery was finally in the era of mass production. In addition to tableware such as plates and mugs, washbasins, toilet bowls, bathtubs, etc. have become ceramics that support all aspects of life.

Well, it has become a “Seto ware” that everyone knows and supports our daily meals.

Everyone, including myself, who is eating rice in a bowl today, please have a meal today while thinking a little about the 1000-year history of Seto ware.